The untitled aquarelle on canvas, 46.5 x 29 cm, was created at the beginning of his time in the academy and shows unmistakable influences of Pablo Picasso, who was then regarded as a model for many art students. Nevertheless, there is also an independent interpretation.

Ernst Fuchs was an artistic prodigy. His early drawings are rightly regarded as ingenious and withstand any comparison with other graphic manifestations of the 20th century.

– Otto Hans Ressler
SaveRemove
Save
Request price
The price of this artwork is not publicly visible. Please write us to request its price.
WhatsApp
Message
Offer
5% for charity
If you buy this artwork, 5% of our profits will go to charities that support people from socially marginalized groups. Read more about our cheritable partner organisations. 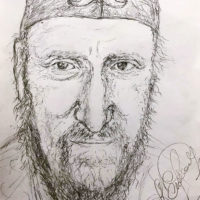 Ernst Fuchs was born in 1930 in Vienna. He was a painter, graphic artist, sculptor, set designer, composer, author, philosopher and visionary – a whopping assortment of art with diverse, overflowing talents. Since his father was a Jew and had to flee to Shanghai after the “Anschluss” of Austria, the then eight-year-old Ernst Fuchs was met with hostility and baptized in 1942 to be Roman Catholic. He himself chose his baptismal name: Ernst Peter Paul, after Rubens, his favorite painter. From 1942, as a twelve-year-old, Ernst Fuchs was taught drawing and painting by Alois Schiemann. From 1946 to 1950 he studied at the Academy of Fine Arts in Vienna; his teacher was Albert Paris Gütersloh. Together with his fellow students Wolfgang Hutter, Arik Brauer, Anton Lehmden and the older Rudolf Hausner, he founded the “Vienna School of Fantastic Realism”.

Go to the artist page of Ernst Fuchs.