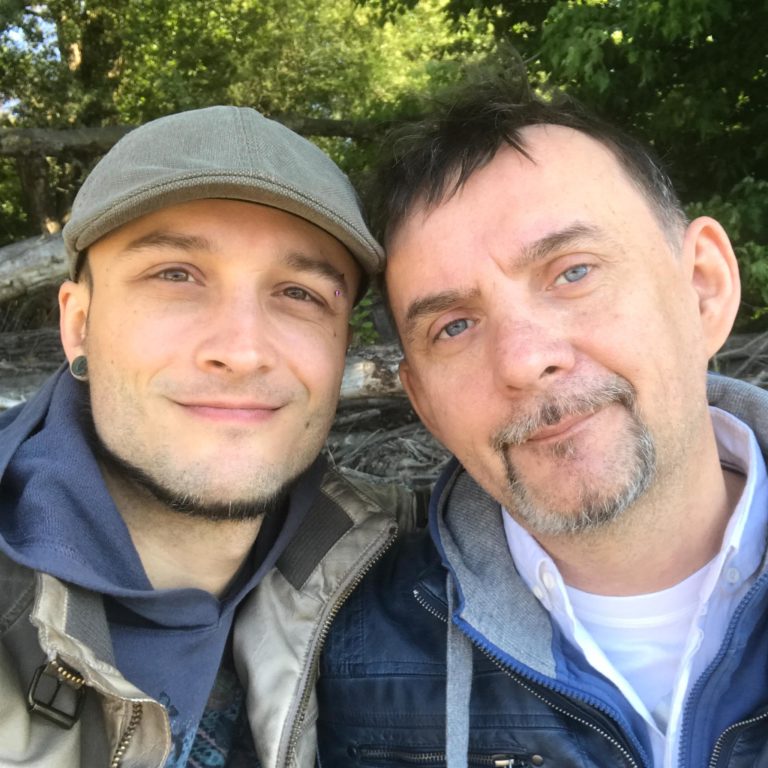 Sergey and Erwin Sovkov got to know each other in 2014 thanks to art and decided in the same year to cooperate in the project “Crystal House” that Sergey has invented in 2005. During the implementation, the two artists also discovered each other and got married in August 2016. In October 2016 they jointly opened the “Ateliergalerie Blaue Tauben”.

Erwin Sovkov was born on 6.5.1983 in Graz. After he had completed his schooling with a high school diploma at a natural science high school, the civil service took him to a Waldorf school with integration. There he got to know with interest the anthroposophical world view and decided as a result to study the space movement art “eurythmy”. He completed most of his training in Switzerland and graduated in 2008 in Vienna.

After an artistic break of 7 years, during which Erwin worked as a professional baker, he started again with his art because he was interested in working together in the project with his husband Sergey. Since October 2016 Sergey and Erwin summarize their work (s) in the “Ateliergalerie Blaue Tauben”.

In the laws of eurythmy, the means of dance become one
“Visible Language” or “Visible Singing”. The foundations for this can be found in the supernatural organization of people, how they behave when speaking or singing. This creates movements for every single sound in the alphabet or every single tone of the scale, for grammatical phrases in the sentence or for musical expressions.
Furthermore, it is also possible thoughts, which are usually only in the mind in a spiritual world, as well as the subjective relationship to these in feelings, directly as physical movements in relation to the space around you – you can say almost in physical / spatial Design to “translate”, which makes them “VISIBLE”.

The project „Crystal House“ and the pictures presented here

The overall project is called “Crystal House”, which is divides into three separate parts. The first part is like the overall project “Crystal House”. The second part is called “Narrow Gate” and the third part is called “Source of Life”. All pictures shown here belong to one of the three parts. Each part is represented in an oversized, central work and bears its title. Many small individual works are grouped around these central works that show additional and other aspects of the pieces.

“Crystal House” deals with the world presented as a fragile crystal. Through human action, the crystal breaks apart in four directions. In the central work it is shown which action led to the break and in which the prevention would have been.
“Narrow Gate” deals with the pain of the person who carries within himself the broken world and seeks healing from it.
“Source of Life” introduces the factors of destruction that a person can pass after passing through the “Narrow Gate”, which opens up the “Source of Life” in him with a future world can imagine.

What appears at first glance is the finished painting in which one unmistakably seeing the creation and performance of Sergey’s. What can be seen as a figure in the painting that influenced the lines of Sergey’s hand in her posture is the creation of Erwin. Photography removed the best moment for a picture from a whole series of movements that carried the life of certain thoughts and feelings. This life is continued in the painting on which Erwin’s manufacturing process only reveals the pose. The result is a painting that carries the life of eurythmy and thus has Erwin and Sergey as authors.