The two pen drawings originate from the mature creative period of the master. Dali had already separated from Gala in 1962, who was his muse and companion for a long time. So it was a stage of life when he turned to other women, "Pour Rosa", the title of the two drawings, each 24 x 18 cm in size, should be an indication. But they are also documents of Dali's high art of drawing.

– Otto Hans Ressler
SaveRemove
Save
Sold
This artwork has already been sold. If you have any questions, please feel free to contact us.
WhatsApp
Message
5% for charity
If you buy this artwork, 5% of our profits will go to charities that support people from socially marginalized groups. Read more about our cheritable partner organisations. 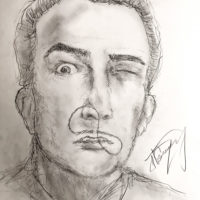 Salvador Felipe Jacinto Dalí i Domènech was born in 1904 in Figueres, Catalonia. He was a painter, graphic artist, writer, sculptor and stage designer. As one of the most important representatives of Surrealism, he is belongs to the most famous artists of the 20th century. He created a whole cosmos of the unconscious that appears in dreams. Melting clocks, crutches and burning giraffes became his distinguishing characteristics. His technical skills allowed him to paint in an Old Master style, a technique later adopted by photorealism.

Go to the artist page of Salvador Dalí.