In the Alps III

In the Alps III is a painting that I have painted in the year 2003. The dimensions are 64 x 48 cm. Do you like my art? Then take a look at more of my artworks on my profile page.

Price
€340.00
SaveRemove
Save
Message
Livechat
Sent
5% for charity
If you buy this artwork, 5% of our profits will go to charities that support people from socially marginalized groups. Read more about our cheritable partner organisations. 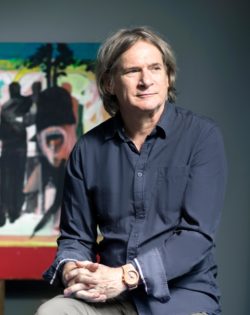 Michael Hedwig is one of the most recognized artists of Austrian contemporary art. His family roots are in East Tyrol and in Transylvania. Born in Lienz in 1957, he has been living in Vienna since he was seventeen. He completed his studies at the Academy of Fine Arts Vienna, in the master class of Anton Lehmden. Already in 1986 Hedwig was awarded the Austrian Graphic Award. In the same year he received his first teaching assignment. Today, as an assistant professor, he heads the gravure workshop at the Academy of Fine Arts Vienna. Accompanied by a lively exhibition activity from Vienna to Tokyo or Istanbul, Berlin, Washington, or from Graz to Paris, the artist works continuously on his images, based on social-mythical, transpersonal concepts. In his pictures, the individual always appears involved in group-dynamic, energetic processes. Hedwig deals extensively with our society and its mechanisms. He analyzes human sensitivities and presents them in manifold ways. In 2005, he created a permanent everyday presence in the heart of Vienna, in the 1st district, in the subway station U3-Stubentor. His monumental mode of operation, which manifested itself in the fasting cloth for the cathedral of St. Jakob in Innsbruck or in his graphite friezes from 2015, is countered by Hedwig’s small-format picture series. His multicolored etchings “Über-Körper” or the black and white etchings “Tagwerk & Nachtarbeit. Miniatures “in which another aspect of his work as an interaction of word and image appears in appearance. Projectually, this interaction of word and image or word-image sound expands in collaboration with the author Karin Peschka and the composer Rudolf Jungwirth in current character series such as “Fries” or “The Wild Hunt”.

Go to the artist page of Michael Hedwig 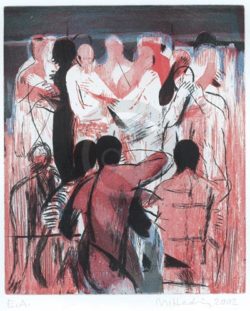 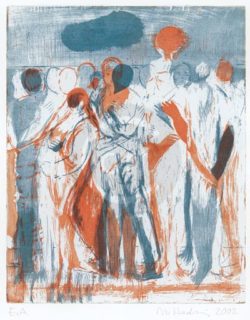 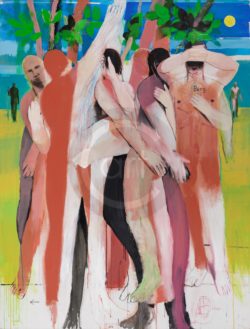 In the garden
Expand 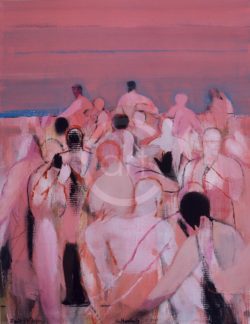