The directionless ordering principle in Höller’s dynamics of multitude passes this time over a phenomenon of broadband attention—the magazine. Here, observation is funneled irrevocably into the face-recognition mode. This selection of organized unity–the topographic experience of faciality–supplies Jochen Höller with a new facet for his ordered investigations. When human beings are loved, faciality represents one of the most gratifying moments in detecting essential links-to-world. Being at the midpoint of multiple attention embodies an instantaneous promise, the promise Höller inverts in its superficiality. He creates an absent stage for the observer. Hyperpolished fragmentation, so meticulously arranged that the self can obtain a portable public—this does us good. Can it be the point? Many points are involved here–but on a structural level during this artist’s creative process, one associative-constitutional ramification of his method emerges. A universal formula, suited in its basic tendencies to every accretion of image and textuality. Towards resisting such a glut of glances and not expiring in visual surfeit, there is nothing to counter the triviality principle of distraction, the pleasure in the bright, gallant factor of excess embodied in this parade of accomplishment. Whether facewash or facebook, the fascination of physiognomy is an epistemological principle from early childhood, finding vitality above all in gazettes that purvey the joyful, absurd longing for riches, beauty, polish, glamour. The question of which visage is worthy of the quantitative arrangement of such a world-as-stage -without leading to prosopagnosy (i.e., facial blindness) – is, in Höller’s methodology, asked anew of the symbolic order as spectral contextualization.
Variations
Select a variation of this artwork by clicking on one of the variation images. 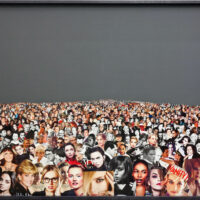 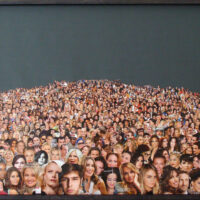 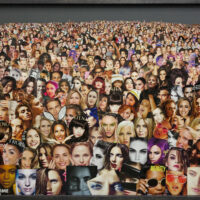 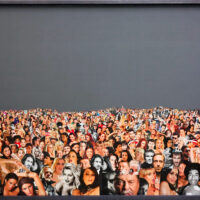 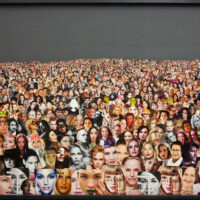 Wienerin
The 3D model may not exactly match the artwork in color and shape. Please take a look at the artwork photos to get a better impression.
Message
5% for charity
If you buy this artwork, 5% of our profits will go to charities that support people from socially marginalized groups. Read more about our cheritable partner organisations.

Collage from paper on cardboard which I have completed in the year 2013. Do you like my art? Then take a look at more of my artworks on my profile page. 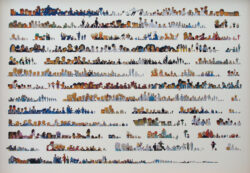 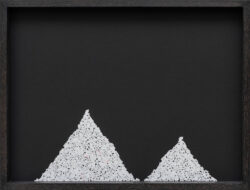 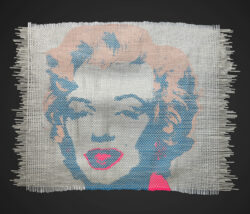 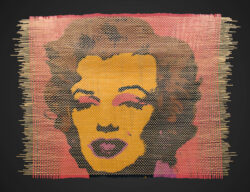 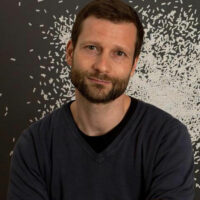 Jochen Höller is an artist of words. There is a story behind each of his artworks. The themes of knowledge and belief are omnipresent and carefully weighed. Words are removed from their context, collected and placed anew. Thus the writings of philosophers form their own images, galaxies are illuminated by letters meticulously placed as star formations, and the loving Marilyn Monroe and Arthur Miller are literally woven into the text. After studying sculpture at the Linz University of Art, the Vienna-based artist focused entirely on working with paper, which is subject to the method of a self-ordering system. The artist plays with conventional notions of order and of information transfer. As a rule, he scans books page by page in search of stimulus words. Höller says, “”I don’t read the texts then, I search them.”” Once he has found the word he is looking for, he extracts it with a Stanley knife. The result is books resembling punched tape, with content and knowledge removed. And, of course, thousands of pieces of paper that Höller has obtained through the extraction process. Both are turned into works of art. The empty books become sculptures that symbolize the acquired knowledge in a “Knowledge Cloud”. He glues the letters and words themselves, often on a monochrome pictorial background, to thought-provoking motifs (Philosopher Series) or heaps that juxtapose world views (Knowledge : Faith Series). In addition to his stylistically recognizable black-and-white works, he also delves into the more colorful world of glossy magazines (Facewash) and turns the role of viewer and “star” on its head. Jochen Höller’s exploration of the themes of society, technology, religion and culture has made him one of the most influential Austrian artists. In 2011 he won the Walter Koschatzky Competition, in 2016 the Strabag Art Award, in 2018 the Strabag SE Values Award and the 1st prize of Bibelwerk-Austria. Höller has presented his works at over 40 national and international exhibitions and art fairs.
1977 in Amstetten, Austria

Go to the artist page of Jochen Höller.