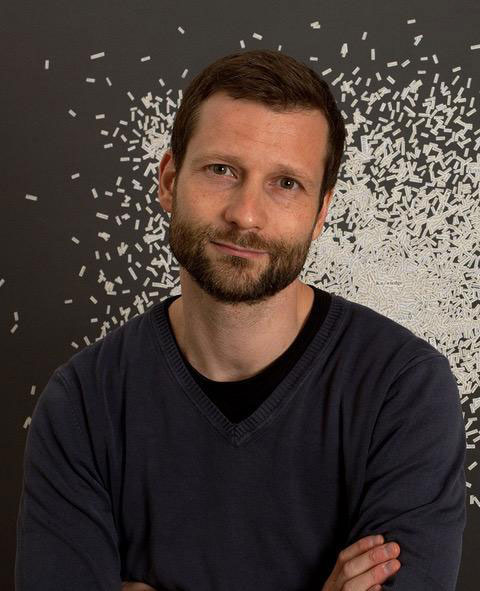 Texts are my basis, books are my material – their contents create an idea of the world – but a changed look at them makes us understand them differently – the world is a series of relative truths, so to speak – or is it never the way it appears to us?

Jochen Höller is an artist of words. There is a story behind each of his artworks. The themes of knowledge and belief are omnipresent and carefully weighed. Words are removed from their context, collected and placed anew. Thus the writings of philosophers form their own images, galaxies are illuminated by letters meticulously placed as star formations, and the loving Marilyn Monroe and Arthur Miller are literally woven into the text.

After studying sculpture at the Linz University of Art, the Vienna-based artist focused entirely on working with paper, which is subject to the method of a self-ordering system. The artist plays with conventional notions of order and of information transfer.

As a rule, he scans books page by page in search of stimulus words. Höller says, “”I don’t read the texts then, I search them.”” Once he has found the word he is looking for, he extracts it with a Stanley knife. The result is books resembling punched tape, with content and knowledge removed. And, of course, thousands of pieces of paper that Höller has obtained through the extraction process. Both are turned into works of art. The empty books become sculptures that symbolize the acquired knowledge in a “Knowledge Cloud”. He glues the letters and words themselves, often on a monochrome pictorial background, to thought-provoking motifs (Philosopher Series) or heaps that juxtapose world views (Knowledge : Faith Series). In addition to his stylistically recognizable black-and-white works, he also delves into the more colorful world of glossy magazines (Facewash) and turns the role of viewer and “star” on its head.

Jochen Höller’s exploration of the themes of society, technology, religion and culture has made him one of the most influential Austrian artists. In 2011 he won the Walter Koschatzky Competition, in 2016 the Strabag Art Award, in 2018 the Strabag SE Values Award and the 1st prize of Bibelwerk-Austria. Höller has presented his works at over 40 national and international exhibitions and art fairs.